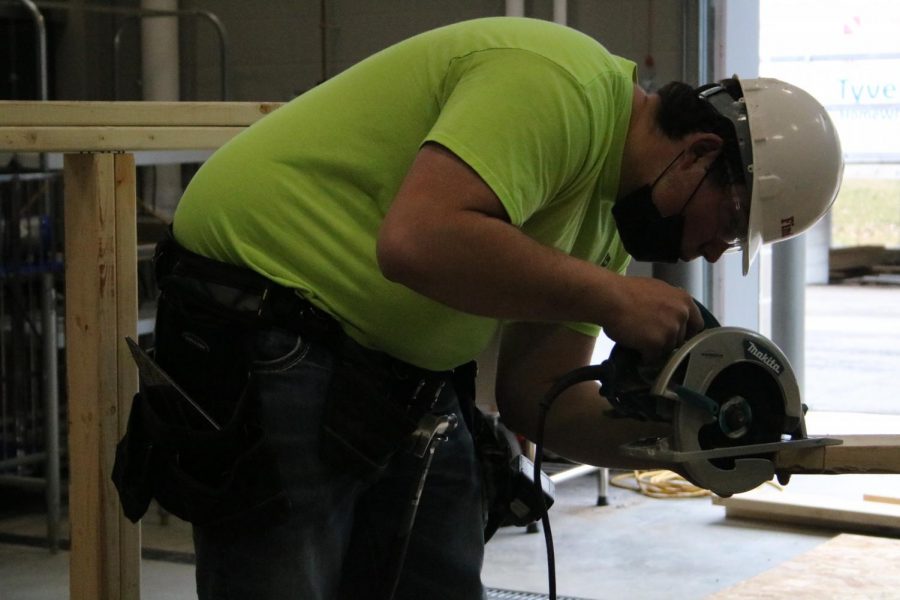 Tape measures, hammers and saws in hand, two seniors competed in the state level Skills USA competition to see who could quickly and accurately create a mock-up of a house framing.

Evaluated on accuracy, precision and construction methods, seniors Dominick Kurascz, and Connor McMahon were given up to four hours to put their skills into practice, said Mr. John Glynn, who supervised the competitors while they worked with camera recording.

“I have to do all of the measuring when they are done on camera,” Glynn said.  Then the two will be evaluated on what the video shows combined with what he measures. The virtual competition is due to COVID-19 restrictions, but does not limit what skills students can demonstrate for the competition. MacMahaon said the competition is just the same as being in front of a judge despite the camera.

MacMahon and Kurascz, who constructed their framing side by side April 14, were allowed to work until 12:20 p.m., but then earned additional time due to a shortage of supplies needed to finish their work.

McMahon said, “I have no idea if my build will make it to nationals,” in regards to a possible chance to compete in the future.

As to why the two seniors competed, both said they didn’t sign themselves up for the competition.

“I did,” said Mr. Glynn, because, “I thought you’d both do great,” talking directly to Kurascz and McMahon, who were cleaning up after competing.

Kurascz thought it wasn’t Mr. Glynn’s business to be signing him up for a competition, but after learning why, he didn’t mind the chance to compete.

MacMahon, while shoving his tools in his backpack, said, “I didn’t really care. I was up for the project.

Both students said that Mr. Persnsteiner, their Construction Trades teacher had earlier told Mr. Glynn he thought they would do well in the Skills USA challenge, of which due to COVID-19, no earlier competition took place.  The state level competition was open for anybody who wanted to enter, and Mr. Glynn admits “he kind of blind-sided the boys” when he told them he had entered their names..

While neither Kurascz nor McMahon know how they did, McMahon said he learned that to compete “you need all of the needed materials.”

Kurascz said that a better plan is also needed because he ended up building his mock frame backwards, partly because the plans were not designed well.

Mr. Persnteiner agreed that whoever designed the plans was done by someone who doesn’t build.

Said Mr. Glynn, he thinks the boys learned, “There’s a world of differences in how you do plans.”

Results for the Skills America competition will be announced at the end of April.  If either student does well, he could qualify for nationals in June which may be in person or virtual, Mr. Glynn said.